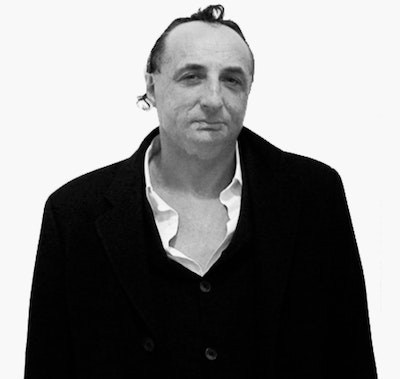 Giovanni Manfredini was born in 1963 in Pavullo nel Frignano (MO), where he lives and works.
Self-taught, he focuses his artistic research on the body, his works are in fact born from the contact of his own body on a surface treated with smoke-black glazes capable of recording its sign. The emergence of this sign / body from light is the slow and laborious conquest that marks the exit of man from the existential darkness.
The innovation of Manfredini's artistic practice lies in maintaining a constant balance between the body art gestures and the classical pictorial tradition, especially of the seventeenth century, which investigates the boundaries between light and darkness. The concept of Body Art inherent in the works of Manfredini, however, differs markedly, for example, from the bodily imprints of Yves Klein: the latter, in fact, was moved by a desire to return to the origins of painting, while for Manfredini his alter ego born from the imprint of his body, it is a pictorial expressive medium that reflects the processes of the psyche thanks to its gestural expression (Helmut Herbst). As for the seventeenth-century tradition, Manfredini looks and brings back the struggle between light and Caravaggio's shadow. The reference to Caravaggio is made explicit from around 2005, when the Modenese artist begins to conceive works that lose the two-dimensionality of the table thanks to the application of open books supported by the imprints of his hands. In the open pages we see details of Caravaggio's works invested by a light coming from above, as if to raise them to the divine.
In 1989 it was his first public appearance with an exhibition at the Biennale of Young Artists of Mediterranean Europe in which he exhibited the first cycle of works entitled Altars of solitude . From here begin three years of great exhibitions in which the artist presents series of works on the elaboration of surfaces such as Surviving and Linea della Vita ; among these we remember the first solo exhibition at the Franco Antonicelli Cultural Union of Turin (1990), Self-portrait in the gallery '90 at the Galleria Civica of Modena and Estezzaat the Rosannaferri gallery in Modena (1991). In the two-year period 1992/93 he decisively develops his search for a new language, open to the relationship between the surface of the work and the living potential of organic matter, from which the VIVI series is born, which marks a fundamental step for subsequent formal results of his research. In 1994 Manfredini developed a series of sculpture paintings entitled Pensieri muti which he exhibited in an exhibition together with new works by Gilberto Zorio. At this point, working for years on and with his body, the artist comes to a search that brings his work to the Attempts of existenceof the first period, executed through body painting, pictorially treated on carbon black veils, to an increasingly conscious pictorial affirmation, which is evolving towards a less performative and existentialist art making in which pure and absolute light defines ecstatic and spiritual images.
Since 1996 his work has intensified with the participation in important exhibitions, both Italian and foreign: Generation 1 at the Galleria Civica di Modena (1997); Open space. New acquisitions at the Galleria d'Arte Moderna in Bologna (1998); Minimalia curated by Achille Bonito Oliva at PS.1 in New York; The Opening curated by Jan Hoet at the SMAK Stedelijk Museum in Ghent ; Italian art. The last forty years by Danilo Eccher and Desire curated by Peter Weiermair at the GAM of Bologna.
In 2000 he held VIVI at the Francesco Girondini Contemporary Art in Verona. In 2001 he followed La Pelle e l 'Anima at the Triebold Gallery in Basel and at Wablingen in Germany he exhibited Works at the Museum der Stadt. The following year he held personal exhibitions first in Berlin, at the Davide Di Maggio, then in Madrid at the Thomas Levy Galerie and in Italy at the Mimmo Scognamiglio in Naples. In 2003 he held Body Language at the Bruckers Galerie in Rotterdam and later returned to Basel's Triebold with Ho Fame . 2005 is marked by an intense exhibition activity abroad: he holds personal exhibitions at the Artcore Gallery in Toronto, at the Barbara Behan Gallery in London and wins the Goppingen VAF Award; in Italy participates in the collectiveSurprise me at the GAM of Bologna. In 2006 he was dedicated the space of the Bandera Foundation of Busto Arsizio on the occasion of the exhibition Viaggio al term della notte . Fuoco is the exhibition held in 2007, together with Giuseppe Spagnulo, at Image Furini of Arezzo. The exhibition revolves around the element that characterizes the search for both artists, one in the field of painting, the other in the field of sculpture; follows Visions and Illusions. Visionary realism in modern and contemporary Italian painting in which it participates in the setting of the sixteenth-century castle of L'Aquila. It dates back to 2008 Holy Scriptures, which he holds at the Galleria D406 in Modena, while in 2009 he won the Michetti prize of Francavilla al Mare and exhibits Remember the heart at the Goethe Gallery in Bolzano.
From 2010 to 2015 numerous exhibitions alternate, both in Italy and abroad: Piaghe e Gloria at the WerkStattGalerie in Berlin; Corporal punishment at the Melesi di Lecco (2010); Veni Sancte Spiritus to the Mimmo Scognamiglio Artecontemporanea of ​​Milan; Opera in black at Henze & Ketterer by Wichtrach / Berne (2011); then he presents Estasi e Liturgia respectively at the Winter Galerie in Wiesbaden and at the D406 in Modena (2013); The Gospel according to John at the Triebold Galerie of Riehen, Basel (2014); finally the two exhibitions in conjunction with the LVI International Art Exhibition La Biennale di Venezia, Per Aspera ad Astra, Church of the Madonna dell'Orto, Venice and Stabat Mater Dolorosa , Giorgio Cini Foundation, Venice.
His works are present in important public and private collections, including the SMAK in Ghent, the Kunstmuseum in Bonn, the Kunsthalle in Stuttgart and the MART in Rovereto.